The Proposed Action consists of both the Missile Defense Agency (MDA) and the Federal Aviation Administration (FAA) actions. MDA would operate the Long Range Discrimination Radar (LRDR) continuously under the changed operational concept. The change in the LRDR operation procedures and its resulting increased high-intensity radio frequency (HIRF) would create a hazard in areas of the National Airspace System where the HIRF would exceed FAA certification standards for aircraft electrical and electronic systems. FAA would take actions related to restricting the flight of aircraft in airspace where these certification standards would be exceeded.

For the LRDR operations Proposed Action, MDA has prepared an Environmental Impact Statement to evaluate the potential environmental impacts associated with proposed changes in operational concept and other associated activities for the LRDR. The Environmental Impact Statement evaluates potential impacts of actions related to restricting the flight of aircraft in the airspace. The proposed airspace restrictions includes expanding the existing Restricted Area (R-2206) at Clear Air Force Station (CAFS) by adding six new Restricted Areas.

Unlike the existing R-2206, the six new Restricted Areas would not contact the ground, and their floor altitudes would range from 1,000 to 2,100 feet above mean sea level (MSL) or 400 to 1,500 feet above ground level (AGL). Three of the proposed Restricted Areas (R-2206B, R-2206C, and R-2206G) would be in effect continuously. The other three (R-2206D, R-2206E, and R-2206F) would be in effect only Tuesday, Thursday, and Saturday, from 2:00 a.m. to 4:00 a.m. local Alaska time; and at other times by Notice to Airmen (NOTAM) or as necessary in response to a national security crisis. Access to Clear Airport would be limited during these times. However, MDA would allow emergency aircraft and medical evacuation flights into and out of Clear Airport as defined in a Letter of Procedure coordinated between MDA, Department of the Air Force, and FAA. The Restricted Areas would cross a 0.8-mile segment of the Parks Highway; though airspace above the Parks Highway would be unrestricted below 2,600 feet AGL (3,200 MSL) for all but 6 hours per week.

In the event that continuous LRDR operations begin before the proposed Restricted Areas are established, FAA would temporarily restrict flight in the same airspace and with the same times of use as for the proposed Restricted Areas. FAA, through the Anchorage Air Route Traffic Control Center, would be responsible for manually rerouting aircraft flying under instrument flight rules around the boundaries of the temporary flight restrictions (TFR). Aircraft flying under visual flight rules would detour around the TFRs. The period during which TFRs would be in place is referred to in the EIS as the “interim phase.” 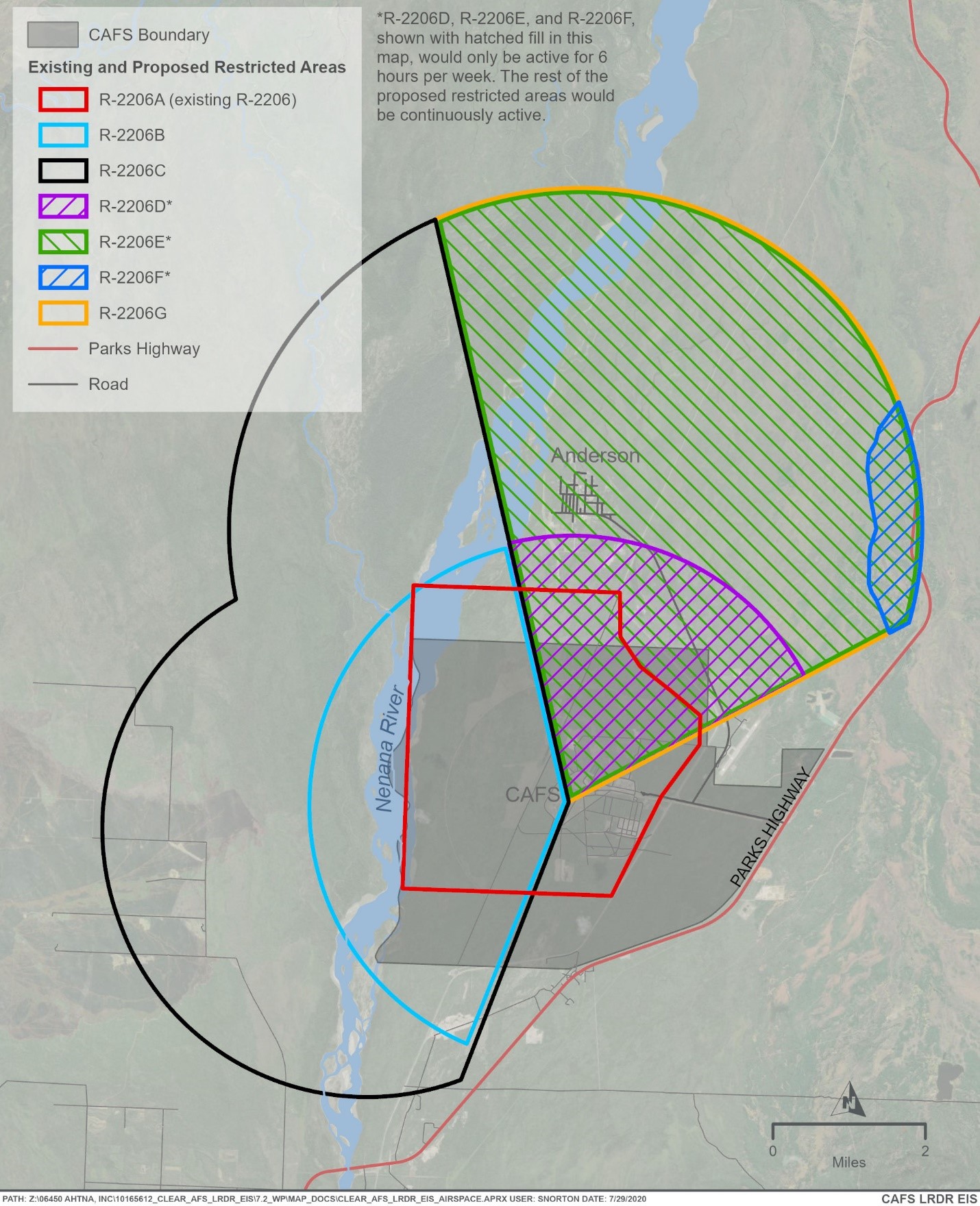 FAA’s proposed rule related to proposed amendments and establishment of federal airways is available at the Federal Register here.